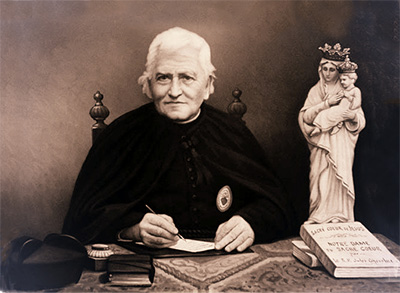 Fr. Jules Chevalier, msc founded the Daughters of Our Lady of the Sacred Heart at Issoudun in France, on the 30th August, 1874. Basic to his charism was the awareness that the whole of creation is the gift of God's love, and that everything that exists is being sustained and cared for by God's tender compassionate care.

For Fr. Chevalier, the Heart of Christ was a true image of a God with a loving heart who calls people to have 'heart' for one another.

Jules Chevalier was born in Richelieu, France on 15th March, 1824. His parents were Jean-Charles and Louise Chevalier. They were not at all wealthy. In 1841, his father was recommended for the job of caretaker of a tract of forests, the administrator of which offered to pay for Jules' seminary training. Jules was much older than his classmates because of his late start, but he eventually finished his studies at the minor seminary and in 1846 he moved on to the major seminary in Bourges. This was quite close to the town of Issoudun which was to play a large role in our story.

Jules Chevalier was drawn to the love of Jesus' Heart during his seminary days, and he dreamed of a Religious Family - women and men who would take the Good News of God's love to one and all.

I have come to cast fire upon the earth and how I wish it were blazing already.
[Luke 12:49]

He wanted to involve as many people as possible in his work and by the end of his life there were over a million lay people enrolled in a confraternity he founded.