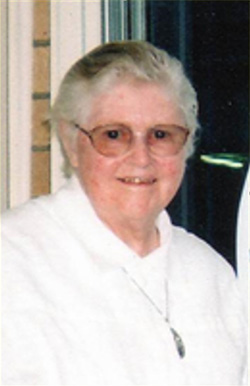 May the Sacred Heart of Jesus be everywhere loved!

Well done, good and faithful servant;
you have shown you have been faithful in small things,
I trust you with greater; come and join in your master’s happiness.
(Mt 25:21)

Sister Damian’s whole life was imbued with faith in Jesus Christ and she was conscious always of how much God loved her. She said that she experienced God in day-to-day events and circumstances, whether good or bad, and all people with whom she had contact.

Damian Bernadette Philben was born in Brisbane on 21st October 1927, as the third daughter of her devout Catholic parents, Andrew Michael Philben and Matilda May, nee Heller. She was baptised in Our Lady of the Sacred Heart, Dara, when she was three weeks old. Unknown to her at this time, this was the beginning of her long association with the Daughters of Our Lady of the Sacred Heart. Her father worked for the Queensland Railways and the family were comfortably off until, when Damian was eight years old, he became bedridden with rheumatoid arthritis and died seven years later in 1941. Despite her father’s ill health Damian was always happy and felt loved and secure at home, thanks to her mother and older sisters, Joan and Margaret, and also at school at St Cecilia’s in Hamilton and later at All Hallows’ School in Brisbane. She considered the most significant people in her faith journey were her mother, together with Sister M. Philippa RSM and Sister Frances Walsh FDNSC. Before she entered our Congregation in May 1947 Damian had been a daily communicant during the four and a half years that she was working as a steno-typist in the office of Castlemaine-Perkins in Brisbane. As she always disliked the name “Damian” when she started work she told the people there her name was Mary!

Damian’s years in Papua New Guinea were spent in New Britain at Rabaul, Pililo, Kilenge and Vunapope, as well as Christ the King High School at Papitalai, Manus Island, and in Port Moresby. For many years Damian was in leadership roles both in schools and in the Congregation. She was very affirming of others and totally respected everyone she met. She had a droll sense of humour and always appreciated a good story and told many herself. Damian is still remembered by her Chinese ex-students at Sacred Heart School, Rabaul, for the breadth of education she gave and for her just dealings when Principal of the co-education boarding school at Papitalai, Manus Island.

As well as being community leader on the various outstations where she ministered, Damian was appointed to major leadership roles in the PNG Province in the years following Independence in 1975. This era not only involved rapid localisation in Government but also, at a slower rate, in the Church and our Congregation. It was a time when the number of Papua New Guinea women joining the Congregation increased. Damian was instrumental, with others, in guiding the Province to provide a sound basis for local sisters to live their lives as Daughters of Our Lady of the Sacred Heart, in the Papua New Guinea context.

As Deputy Provincial from 1980 to 1985 and Provincial Leader for six years from 1986 Damian’s clear, analytical mind and her faith and closeness to God enabled her to assist the sisters, both Papua New Guinean and expatriate, to further their education for ministry and to be enriched in their understanding and living of their religious vocation through ongoing formation. One of her main focuses was bringing the Papua New Guinean sisters together in profession groups for renewal of all aspects of their lives. She assisted each sister to reach her fullest potential. This was much appreciated by the sisters as were her compassion and understanding in times of difficulties.

In 1997, because of ill-health Damian left Papua New Guinea and returned to the Australian Province. Here she was asked to be the community leader at Corinda and, as in Papua New Guinea, she saw each sister as a special person and treated all with a beautiful compassion and understanding. While at Corinda, Damian undertook training in Psychiatric Pastoral Care and used the knowledge and skills she gained to assist patients in Catholic Hospitals in Brisbane. She was eminently suited to this sensitive role.

As a member of two General Chapters and a General Conference, her input was invaluable and she was grateful to visit Issoudun and Rome at these times. She appreciated opportunities for personal renewal, was a deep reader and loved a good discussion on Scripture and current events.

Damian had been in poor health for many years. After spending a year in East Bentleigh community, she returned to Corinda, where she again became the Community Leader. However, at the end of 2011, due to ill health, she moved to Kensington convent where she lived for two year, before moving to St. Joseph’s Aged Care Facility, on 9th October, 2013. In the last two years Damian’s health continued to deteriorate, until God called her to himself on the morning of February 10th.

This quote from St. Augustine is an appropriate one to sum up Damian’s life. “My heart was made for you, O God, and is restless until it rests in You. May Damian rest in peace.

Our Lady of the Sacred Heart Chapel, Kensington
16 February 2018