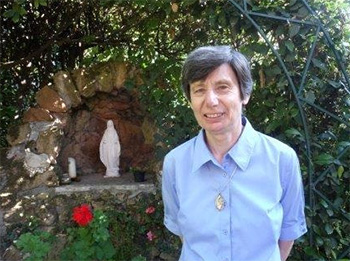 My Song will be for you forever you the music in my Heart.
You, my love, my light my friend. You the way and path before me.
You will lead and guide me home.

These words from Bern’s favorite hymn speak beautifully of faith, gentleness, serenity, joy, and hope. All that was Bern. On the 10th March our dear Sister and friend,  Bernadette gently and peacefully breathed her last breath as she was lead home by God, her love, her light her friend,  the one who called her into life 65 years ago and whom she had served faithfully as a Daughter of Our Lady of the Sacred Heart for 36 years.

Bernadette Jacoba Maria Koning, Bernie to her family and Bern to many of us, was born on 22nd February 1956 to Ben and Corrie Koning, the second eldest of eight children. Her parents grew up in Europe, as children through the depression and as teenagers through the Second World War. In January 1954, a month after they were married, they migrated to Australia from the Netherlands. Her father was a plumber and gasfitter who worked very hard to provide for the needs of his family, including a good Catholic education. Her mother, a housewife, was a wonderful homemaker, surrounding her large family with love. Bern recalls being influenced by her parent’s faith in God which was simple, - demonstrated not so much in words but in practice – in how they cared for others, especially the less fortunate, the lonely and for those who were a little different.

All of Bern’s education was in Brisbane.  She attended Our Lady of Fatima, Acacia Ridge and St Brendan’s, Morooka, primary schools.  Her secondary education was at Our Lady’s Secondary College at Annerley. On the completion of her schooling Bern spent some years doing clerical work in the Queensland public service. It was at this time she was drawn to do something for God and for others. Seeing an advertisement for PALMS advertising for lay missionaries Bern made an appointment for an interview with them. She packed her bags and then told her parents she would be travelling to Sydney the next day for the interview. Bern was decisive in this decision as she knew want her heart wanted. As they did with all their children, Ben and Corrie supported Bernadette in her decision.

In 1978, she went to PNG as secretary to Marianville Girls’ High School, Port Moresby. Bern’s time in PNG was life changing. She made lasting friendships and enjoyed many adventures with her three sisters when they visited her. It was here that she met the Daughters of Our Lady of the Sacred Heart and was strongly attracted to their charism: ‘to be the heart of God on earth.’  The seed of a religious vocation was sown in Bern’s heart.

When Bern returned home, she completed an Office Education Course for six months. Little did she know at this time, these months studying secretarial skills would take her all the way to Rome to be the Congregational Secretary, where her skills, efficiency, and attentiveness to detail helped ensure the smooth running of our International Congregation for 12 years.

In 1981 she wrote to the Provincial leader of the Daughters of our Lady of the Sacred Heart to enter the novitiate, not being one to waste words Bern wrote: ‘ Dear Sister, I would like to join your Congregation. Please send me the forms.’ When she received the forms, she wrote back to the Provincial leader: ‘Dear Sister, I was glad to receive your letter. I didn’t realise there was so much involved in becoming a nun.’

Bernadette was professed on 31st of January 1985 and made her final vows in 1990. Bern’s words written at this time were evident throughout her life, both in her living and her dying, when she wrote:  ‘I am prepared to live this life, relying on God’s grace and in union with Our Lady of the Sacred Heart whose continual yes to whatever God asked I wish to imitate.’

After her profession Bern worked at St Joseph’s as a Nurse’s Aid. In 1986 she commenced her nursing training and after two years she realized this was not for her. From 1988 she began her lifelong ministry serving the needs of the Province and Congregation in administration. Bern worked in the office of our Colleges in Kensington and Bentleigh. Here, she was loved by staff and students alike and was famous for always maintaining calm even in the midst of the occasional chaos found only in schools.

In 2006, Bern moved to Rome to be the Congregational Secretary, she was an excellent administrator, and worked very hard and very efficiently, in a spirit of kindness and generosity, her eye for detail and attention to small but important things, deeply touched the Sisters in the Generalate Community. As the Community leader not only was she a caring and helpful sister but to the many visitors who passed through Rome she was a welcoming and warm presence. While in Rome Bern formed deep friendships and I know these friends of hers, our Sisters, are joining us today from all around our world.

When Bern returned to Australia in 2018, she once again took on the role of executive officer for OLSH Overseas Aid. Bern had a passion for our OS Missions as it was during her experience as a lay missionary that the spark of Divine love within her heart was ignited and deepened.  Bern worked tirelessly and was meticulous in tasks that were often tedious and mundane. She generously  assisted our Sisters with painstaking tasks such as writing funding applications, acquittals,statistics and reports,  She sought no accolades, it was reward enough to be able to assist in some small way of bringing God’s love to God’s people, especially the poor and needy.

Today, we don’t just remember the past and events of Bern’s life, we also remember and celebrate the beauty of her person. Bern was a remarkable woman with a kind and caring heart who always thought of others. She was beautiful in every sense of the word, giving everyone around her the gift of a nicer world to live in. Bern loved her family and her OLSH Sisters, she enjoyed gardening, classical music, movie afternoons, walks along the beach and so much more.  As her health declined and she became physically weaker Bern’s courage, gracious acceptance and surrender was an inspiration to us all.  What a gift Bern has been to our Congregation and to each of us whose lives have been enriched by her attentive listening, beautiful smile, sense of humor and deep faith in God.

Bern’s desire was to die at home. I am grateful to the Sisters, Yolanda, and Bern’s family especially Donna, Robin and Treez whose love and care of Bern allowed this to happen.

I thank the doctors and Medical staff at the Royal Women’s Hospital for their compassionate love and care of Bern over many years and more recently, the medical staff of St. Vincent’s Hospital.

Accompanying Bern on her final journey was a precious, sacred time. In these last days Bern had turned her face toward death with dignity, graciousness, and serenity, she was undemanding and uncomplaining. Last week she said she needed nothing, just the love that surrounded her.  And she knew with absolute confidence when death came who was waiting for her, the God who called into to life: her love, her life, her friend, as well as her beautiful parents, Ben and Corrie.  We will be ever grateful to Ben, Corrie and the Koning family for the gift of Bern to our Congregation!

Let us surrender to our deep grief as we enter the sacred circle of loss, trusting that Bern’s gentle soul is at peace. Go dear friend, surrounded by our love … thank you for your kindness, simplicity, generosity, trust, and love. Thank you for your smile that brightened our lives.